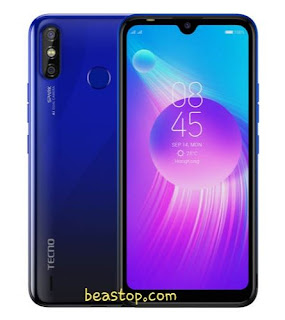 Techno Company announced its new economic phone, the Spark 4 air, Techno Company announced that the phone was specially made based on the opinions of its users, which was the first of which is the price of the phone with a good design and cameras in its price category with the ability to remove the battery, which has become rare The property, which gives you a priority in purchasing another battery and installing it at any time, but will you be able to find accessories for this phone, because Techno company unfortunately rarely finds them in spite of it, the company has succeeded in producing a phone with good specifications and a better price so let's get to know the full specifications of the Tecno Spark 4 phone Air ?! What are its most important advantages and disadvantages as follows.

• Tecno Spark 4 air comes in dimensions of 156.1x75x9.2mm.
• The phone supports two Nano Sim cards and is placed after the back cover is removed.
• The phone supports 2G, 3G, and 4G networks.
• The durability and quality of manufacturing used in making the phone comes from polycarbonate plastic, which is the norm in this category.
• Notch display in the form of a water drop or Dot Notch.
• The IPS LCD screen comes in 6.1 inches and comes with HD + quality of 720 x 1560 pixels at a density of 281 pixels per inch and supports the new dimensions of 19.5: 9 and you can cancel the control buttons and use gestures. Instead, it aims to fully experiment with screen space.
• The front camera comes with 5 megapixels with F / 2.2 lens slot with front flash to increase the amount of light in low light.
• The rear camera comes with a dual camera, as the first camera comes with a 13-megapixel camera with an F / 2.0 lens slot, and the second camera comes with a 0.3-megapixel VGA in addition to a dual LED flash back.
• Tecno Spark 4 air supports the ability to shoot videos in FHD quality with a resolution of 1080 pixels at a frame rate of 30 frames per second in addition to its support for shooting videos in HD quality at a resolution of 720 pixels at a rate of capture at 30 frames per second.
•  The phone comes with a 32 GB solid memory with 2 GB RAM.
• It also supports the ability to increase storage space with a memory card up to 256 GB.
• Security means: The phone supports the fingerprint sensor and comes in the back of the phone and also supports the feature of Face Unlock 2.0. In addition to supporting it to other sensors such as acceleration, proximity and light.
• Tecno Spark 4 air supports Wi-Fi at a / b / g / n frequencies in addition to its support for the Hotspot feature.
• The phone also supports Bluetooth version 4.2 with the properties of A2DP, LE. GPS supports GPS, as well as A-GPS support.
•  The phone also supports the 3.5mm port for headphones.
• The USB port comes from the Micro USB type with support for OTG.
• tecno spark 4 air battery capacity is 3000 mAh.

1. There is no space for the secondary microphone for noise and noise insulation.
2.  The external speakers come on the back of the phone so it is easy to mute when placed on a flat surface.
3. Tecno Spark 4 air appeared to be easily dirty due to its glossy finish.
تعديل المقال
الأقسام Tecno