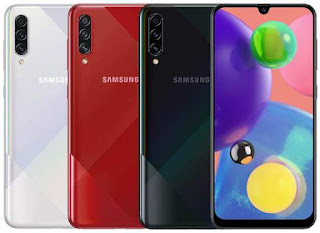 Samsung launched Galaxy A70s in the A series to be the latest version and development of its previous Galaxy A70 phone. The rear camera was developed in particular to become 64 megapixels with its support for Night Mode to try to overcome the defect of the A70 as it was producing bad pictures in lighting The camera has been improved to remedy this defect, so let us know the rest of the full specifications of the Samsung Galaxy A70s:

-Galaxy A70s comes with dimensions of 164.3 x 76.7 x 7.9 mm, as for weight it comes in 187 grams with a plastic design.
-The phone supports two Nano Sim cards, in addition to its support for NFC sim.
-Samsung Galaxy A70s  supports communication networks as it supports the frequencies of the second generation 2G and 3G and the fourth generation 4G.
The screen comes in the form of a notch in the form of Water Drop or the Infinity U as it calls it Samsung and the screen comes from the type of Super AMOLED and comes with an area of ​​6.7 inches with the quality of FHD + 1080 x 2400 pixels at a rate of pixel density 393 pixels per inch, the pixel density rate is excellent and the screen supports the dimensions of the display by 20: 9 The screen supports more than one mode and you can move between them according to your desire while protecting the screen on the third generation gorilla.
-Samsung A70s comes with a processor from Qualcomm, where it comes from the type of Snapdragon 675 with 11 nano technology, with an Adreno 612 graphic processor, it is the same as the Samsung Galaxy A70 processor, and it also supports the Game Booster mode to enhance game performance for a better and faster gaming experience.
-The front camera comes with a 32 MP resolution with an F / 2.0 lens slot.
-The rear camera comes with a triple camera, where the primary camera comes with a 64-megapixel camera with an F / 1.8 lens slot, the second camera comes with an 8-megapixel camera with an F / 2.2 lens slot for Ultra Wide Angle photography, and the third camera comes with a 5-megapixel camera with an F / 2.2 lens slot for isolation and portrait Single LED flash back and cameras support Night Mode.
-The phone supports the secondary microphone for noise and noise insulation while in use.
As for video shooting, it supports 4K photography with 2160 pixels at a rate of capturing 30 frames per second, and FHD photography with 1080 resolution at a rate of capturing 30 frames per second and supports video shooting of Super Steady Mode in addition to its support for shooting Slow Motion in HD quality with a resolution of 720 pixels with a rate of 240 capture Fps.
-Galaxy a70s supports Wi-Fi at a / b / g / n / ac frequencies and supports dual-band, Wi-Fi Direct, hotspot.
Bluetooth supports the latest release of the fifth edition in addition to its support for A2DP, LE.
GPS supports GPS and other navigation systems such as A-GPS, GLONASS, GALILEO, BDS.
Read also: Samsung Galaxy a21s best price
-The USB port comes from Type C.
-The phone supports the 3.5mm port for headphones and also supports Dolby Atmos for a better audio experience.
Security means The phone supports the fingerprint sensor and comes at the bottom of the screen and also supports Face Unlock.
-The battery comes with a capacity of 4500 mAh with battery support for 25 W fast charging technology.
It comes with the latest Android 9.0 Pie operating system with the latest Samsung One UI interface.
-The phone is available in red, white and black.
-The screen offers saturated colors with acceptable brightness in the sun.
-samsung a70s Supports the activation of two SIM cards and a memory card simultaneously.
Supports shooting videos in 4K quality with a resolution of 2160 pixels.
- RAM is quite large and it will definitely give you full flexibility to open many applications simultaneously.
-The performance of the processor is excellent, both in everyday tasks and even in games, but we had hoped for a newer processor such as Snapdragon 730.
The battery performs well during the day and works for a long time.
-The screen fingerprint performance has been improved from the previous version.