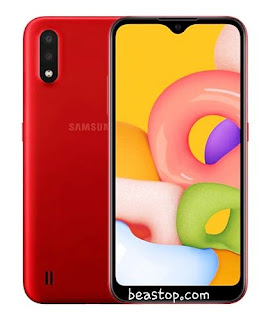 The Samsung Galaxy A01 mobile phone is a development for the cheapest phone from Samsung in the recent period Samsung A2 Core .. And, contrary to what is expected from Samsung, a processor was used by the Qualcomm company as Snapdragon 439 was used, although it is old, but it is still accepted in this category with a notch screen So that the Samsung Galaxy A01 phone is one of the cheapest Samsung phones currently that come with a screen in the form of a note in this category so let us know the full specifications of the Samsung Galaxy A01 phone and what are its most important advantages and disadvantages and is it worth buying or not as follows.

■ Advantages of samsung galaxy A01 :

1. Samsung Galaxy A01 dos not supports Notification bulb .
2. The phone is missing support for the fingerprint sensor.
3. The bottom edge of the phone is large and it was best to cut it down.
4. The phone screen is relatively small, but it may be suitable for anyone who wants a small screen phone.
5. The 16 GB version is very little and it was better to have the phone in a larger version.
6. An old USB port, and there are other phones competing at the same price at the Type C port now.
7. The external speakers come on the back of the phone and is easy to mute when placing the phone on a level surface.
8. The battery is not the strongest in the price category as the Redmi 8A and Redmi 8 are larger.
تعديل المقال
الأقسام Samsung phones