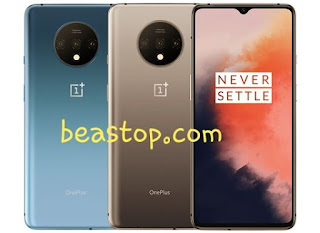 OnePlus announced its latest OnePlus 7T phone to be a continuation of its previous OnePlus 6T phone. The screen space has been increased to greater than before with support to 90Hz for a better experience in seeing and watching with interest in cameras, so the phone now has a wide camera camera, which was one of The defects that were present in the 6T were solved with the introduction of the most powerful processor on the market now, as the company presented us with a Snapdragon 855 Plus processor. More than this in the following article .

● Advantages of the OnePlus 7T :
• The phone comes in dimensions of 160.94 x 74.44 x 8.13 mm, and the phone is estimated to weigh 190 grams.
• The manufacturing materials used in the phone come from glass with an aluminum frame.
• The phone supports two SIM cards and comes with a Nano Sim type.
• The phone supports 2G, 3G, and 4G networks.
• The screen comes in the form of a notch in the form of Water Drop and comes from a 6.55-inch Fluid AMOLED screen with FHD + quality of 1080 x 2400 pixels at a pixel density of 402 pixels per inch and the screen supports 20: 9 dimensions and supports a layer of Corning Gorilla Glass and supports the screen HDR10 + and 90Hz for more efficient gaming performance in particular, in addition to screen support for more than one mode such as Video enhancer, Reading mode and Night mode.
• The phone comes with two versions of solid memory and random memory as follows: -
- The first version comes with a 128 GB UFS 3.0 solid memory with 8 GB RAM.
- The second version comes with a 256 GB UFS 3.0 solid memory with 8 GB RAM.
• The phone does not support the ability to increase the space with a memory card.
• The performance comes with a processor from Qualcomm, Snapdragon 855 Plus, it is the most powerful processor from Qualcomm, and the processor comes with 7 nano technology, with an Adreno 640 graphic processor.
• The front camera comes with a 16-megapixel Sony IMX471 sensor with an F / 2.0 lens slot.
• The rear camera comes with a triple camera, where the first camera comes with a 48-megapixel sensor with a type of Sony IMX586, which is the primary camera and comes with an F / 1.6 lens slot and supports the optical OIS stabilizer and EIS electronic stabilizer and the second camera comes with a 12-megapixel camera with an F / 2.2 lens slot for imaging Telephoto and the third camera come with 16 MP with an F / 2.2 lens slot for Ultra Wide Angle photography with dual LED flash.
• Wi-Fi comes with a / b / g / n / ac frequencies in addition to its support for Dual band, Wi-Fi Direct, DLNA, hotspot.
• Bluetooth comes with the latest release version V, with support for A2DP, LE, aptX HD.
• GPS geolocation supports it also supports other navigation systems such as Dual band A-GPS, GLONASS, BDS, GALILEO, SBAS to determine the location faster and more accurately.
• Security means: The phone supports the fingerprint sensor, it comes with a built-in screen, and also supports Face Unlock.
• It also supports most other sensors such as acceleration, proximity, compass and gyroscope.
• The USB port comes with Type C in addition to its support for OTG feature.
• The 3800 mAh battery supports 30-watt fast charging with OnePlus' Warp Charge technology.

● Disadvantages of the OnePlus 7T :

1. The phone is missing wireless charging.
2. Water and dust resistant does not come with any certification.
3. The phone does not support the 3.5mm headphone jack.
4. It does not support the ability to increase space with a memory card.
5. There is nothing new about the screen shape from the front, as it is the same OnePlus 7 did not use the full screen, which became available on phones much cheaper.
تعديل المقال
الأقسام OnePlus