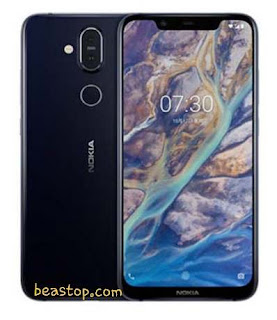 HMD Global presented us with its new Nokia 8.1 phone, which is known as Nokia X7 in October 2018, as the Nokia 8.1 phone is the new and upcoming generation to basically replace the Nokia 6.1 Plus phone and addresses the most important deficiencies that existed in it where it was mainly developed And to make it better than before as the phone comes with a larger screen with a stronger Snapdragon 710 processor with back cameras with an F / 1.8 aperture instead of F / 2.0 to attract light better and a better front camera and the battery capacity was increased to provide better performance so let's get to know the rest of the specifications in detail as follows :

• Data connection speed comes with LTE Cat 6 speed.
•  Nokia 8.1 comes in dimensions of 154.8 x 75.76 x 7.97 mm, and the weight of the phone comes in a weight of 178 grams.
• The phone supports the 3.5mm headphone jack.
• The durability and quality of glass manufacturing from the front and back with an aluminum frame.
• The screen is 6.16 inches and comes in IPS type LCD as a notch to provide dimensions of 19: 9 display.
• The screen comes in FHD + quality with a resolution of 1080 x 2280 pixels at a density of 408 pixels and the screen occupies from the front end 81.2%. 64 GB Solid Memory with 4 GB RAM.
• The phone also supports the installation of external memory up to 400 GB and place the second chip.
• The phone supports most of the sensors as the fingerprint sensor supports and comes at the back of the phone with support for compass, gyroscope, acceleration and proximity sensors.
• Nokia 8.1 comes with the Qualcomm SDM710 Snapdragon 710 processor with 10nm manufacturing quality with eight cores.
•  As for the graphic processor, it comes from the type Adreno 616.
• The phone supports Wi-Fi with all available frequencies a / b / g / n / ac in addition to its support for Dual-band, WiFi Direct, hotspot.
•  It comes with the latest version of Bluetooth Fifth Edition, with support for A2DP, LE features.
• GPS supports GPS with A-GPS, GLONASS, BDS.
• As for the USB port, it comes from Type C and supports OTG.
•  The front camera comes with 20 MP with an F / 2.0 lens slot.
• The rear camera comes with a dual camera and comes prominently from the back of the phone as the first camera comes with a 12-megapixel camera with an F / 1.8 lens slot. As for the second camera, it comes with a 13-megapixel camera with a dual LED flash.
• The battery comes with a capacity of 3500 mAh and the battery supports fast charging technology so it is fully charged in less than an hour and a half.
• You can hide the notch in the settings.
• The portrait works well when there is good lighting.
• The phone supports 4K video recording and shooting with 2160p resolution.
•  It supports OTG to easily play any USB Driver on your phone.
• Zeiss optics cameras offer excellent performance.
• The only rear camera in the middle class with optical stabilization.
•  The processor performance is good, and Antutu achieved 166872 points.
• Battery performance is good as it lasted for more than 6 hours Screen On.
• The phone supports the ability to unlock the phone via Face Unlock and works also acceptable.
• The fingerprint sensor performance is very fast and we have never had a problem with fingerprint recognition.

1. You cannot use both SIM cards and a memory card simultaneously.
2. Low storage space for the phone's price.
3. The notch on the screen is relatively wide with a large lower edge of the screen.
4.  We expected the phone to come with stereo headphones, but unfortunately the Mono headphones still offer average sound.
5.  Because the back camera comes prominently from the back, it easily scratches and breaks, as we found when the phone was placed on the table, it was very unstable.