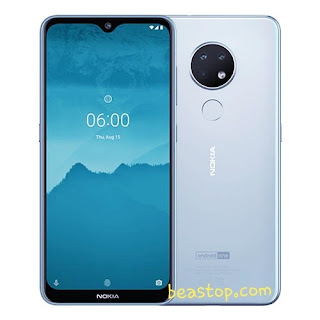 My Nokia 6.2 and Nokia 7.2 phones were announced at the IFA 2019 conference in Germany, so the Nokia 6.2 phone was the cheapest phone, HMD Global announced that the Nokia 6.2 phone screen is one of the best screens currently in Nokia, with PureDisplay technology, the company stated that it gives Enhancement in screen colors to be better than regular screens, the phone was issued to serve as an upgrade to the previous Nokia 6.1 phone, performance has been improved relatively with better cameras than before. The rest of the full specifications of the Nokia 6. 2 What are its main advantages and disadvantages as follows.

• The Nokia 6.2 comes with dimensions of 159.9 x 75.2 x 8.3 mm with an estimated weight of 180 grams.
• The radio supports FM and NFC, and the phone supports two SIM cards, Nano Sim.
• As for the support of communication networks, the phone supports the second generation 2G, 3G, and 4G networks.
• Notch screen in the form of a water drop of 6.3 inches with FHD + quality 1080 x 2280 pixels at a pixel density of 400 pixels per inch and the company calls it the name of the PureDisplay and also supports the dimensions of the display in a ratio of 19: 9 with a layer of protection on the screen type Corning Gorilla Glass generation Third, the screen supports Night Light mode to protect your eyes from blue rays.

1. The phone is not supported for fast charging.
2. Unfortunately, the edges of the screen are still large.
3. The appearance of the back camera is easy to scrape and dust.
4. The phone gets stained and gets dirty very easily due to its glass origin.
5. The price of the phone is relatively high as there is no fast charger in the box.
تعديل المقال
الأقسام Nokia