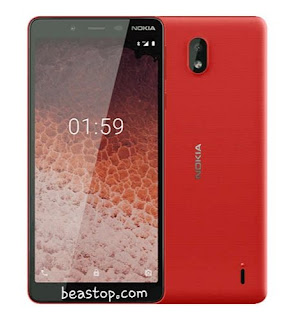 HMD Global seeks to control the economic category with the least of its Android phones through its new Nokia 1 Plus phone to be the background of Nokia 1 as it has appropriate specifications with its price with an acceptable external design that does not suggest cheap price as it was improved from the previous version of Nokia 1 where the screen became larger with Improving cameras and battery capacity significantly, as the company announced that its Nokia 1 phone was the best-selling phone last year, so it is trying through its latest Nokia 1 Plus phone to try to continue the success of the company, so let's review the full specifications of the Nokia 1 Plus phone and what are its most important advantages and disadvantages and is it worth buying or not ? !

• The phone comes in dimensions of 145 x 70.4 x 8.6 mm.
• The phone supports two SIM cards and they are placed under the cover.
• The phone supports all communication networks, as it supports 2G networks, 3G networks, and 4G networks.
• The data connection speed of LTE Cat 4 comes to enable you to download 150Mbps and upload at 50Mbps.
• The screen comes in the traditional form where the screen comes from the type IPS LCD with an area of ​​5.45 inches and comes in FWVGA + quality 480 x 960 pixels at a rate of pixels density 197 pixels per inch and provides dimensions of 18: 9 aspect ratio and occupies the front end of 75.1%.
• The phone is available with 8 GB storage with 1 GB RAM.
• Solid memory comes from the eMMC type, and the phone supports the ability to increase storage space via a memory card up to 128 GB.
• The processor comes from MediaTech, MT6739WW, 28nm technology, and a PowerVR GE8100 graphic processor.
• The front camera comes with 5 megapixels.
• The 8MP rear camera comes with a LED flash back.
• The phone supports 720p HD video recording at a frame rate of 30 frames per second.
• The phone supports Wi-Fi at a / b / g / n frequencies with hotspot support.
• Bluetooth comes in version 4.2 in addition to its support for A2DP.
• The Nokia 1 Plus also supports acceleration and proximity sensors. The Micro USB port comes in the second version.
• It supports the 3.5mm headphone jack and comes on top of the phone.
• The phone battery comes with a capacity of 2500 mAh.
• GPS : supports GPS with support for other navigation systems such as A-GPS, GLONASS.
• It comes with the latest Android 9.0 Pie operating system, Go edition to match poor phone specifications.
• The phone supports FM Radio.
• The price of the phone is very cheap and competitive.
• It supports 4G networks.
• The latest Android Pie operating system.
• Easy to use and hold with one hand due to its small size.
• Android Go means light apps with smooth and acceptable performance.
• Ensure that the phone is updated within an acceptable period, unlike other companies that do not support it.
• The screen size is large but its resolution should have been improved to be at least as accurate as Redmi Go.

1. Very limited performance for the processor, as usual, in the price category.
2. The phone does not support the fingerprint sensor or Face Unlock even this is also normal in this price category.
3. The battery should have been increased as Redmi Go comes with a larger battery
تعديل المقال
الأقسام Nokia