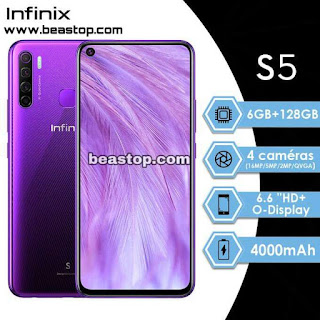 Infinix announced its cheapest phones that come with a hole screen so far compared to other companies with 4 rear cameras and a large solid and random memory with a 32-megapixel front camera. The company is striving to excel in its phones in the medium and economic price category, after it announced the S4 The previous one that was transferred in the company where it was the cheapest phone on the Water Drop screen at the time, as it was the cheapest phone also with a triple camera and 6 GB RAM, so let's get to know the full specifications of the Infinix S5 phone and will it be a strong competitor for Redmi Note 8 and Realme 5, let's get to know that as next one .

-Infinix S5 supports FM radio.
-The phone also comes in dimensions of 164 x 76 x 7.9 mm with a weight of 178 grams.
-The phone supports two SIM cards, Nano Sim.
-The phone supports 2G, 3G, and 4G networks.
-The durability and manufacturing quality used in the phone comes from glossy plastic.
-The screen comes in the shape of a hole to be the first hole screen from Infinix as the leading phones, where the screen comes from the type of IPS LCD with an area of ​​6.6 inches in HD quality + 720 x 1600 pixels at a rate of pixels density of 270 pixels per inch, The screen also supports the new dimensions 20: 9 to see the content Bigger, whether in games, videos, or viewing pictures, etc. You can also hide the hole if you are not a fan, or you can use gestures instead of control buttons to enjoy the full screen experience and work quickly.
-As for performance, the phone comes with a processor from Media Tech, MT6762 Helio P22, with 12nm technology, such as the Infinix S4, Samsung Galaxy A10s, and Realme C2, with a graphics processor, PowerVR GE8320, the processor is not more powerful than Snapdragon 665 or Helio P60 in order to improve competition with phones. Others The phone also supports Game Mode to better enhance gaming performance.
-The front camera comes with 32 megapixels with support for the 3D Face Beauty mode in front of it with support for artificial intelligence. 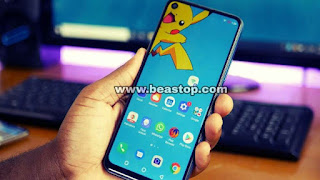 -As for the back camera, it comes with a quad camera, where the first camera comes with a 16-megapixel camera with an F / 1.8 lens slot, which is the main camera, and the second camera comes with 5-megapixel resolution for ultra wide and macro photography (with the same lens) and the third camera comes with a 2-megapixel resolution for isolation and portraiture And the fourth camera is an AI camera to help with artificial intelligence and help in photography in low light in addition to the presence of a four-LED flash back flash.
-The phone supports 1080p FHD video capture at a frame rate of 30 frames per second and also supports 720p HD video capture at a frame rate of 30fps.
-The phone supports Wi-Fi at a / b / g / n frequencies with the ability to make a virtual network via hotspot.
-The phone also supports the 3.5mm port for headphones.
-Supports Bluetooth version 5.0 and supports A2DP, LE features.
-The phone supports GPS geolocation with support for A GPS.
-The phone supports most of the sensors as the accelerometer, proximity sensor, compass and gyroscope support the operation of virtual reality glasses.
Security means: The fingerprint sensor comes on the back of the phone and also supports the Face Unlock feature to open the phone by face.
-The USB port comes from the old type Micro USB version 2, with support for OTG.
-The phone comes with a 4000 mAh battery.
It comes with Android 9.0 Pie OS with XOS V5.5.2 interface.
-The phone is available in blue, purple and black.

Disadvantages of the Infinix S5:

-The phone does not support the light sensor so you will need to manually adjust the brightness.
Poor screen brightness under sunlight.
EIS does not support electronic installation so you will find vibration while shooting videos.
-The company still did not offer anything new in performance because of the weak processor, it is like the previous Infinix S4 only in part of the screen and the internal space.
-The company has not announced any protection layer despite the support of competing phones.
The back of the phone is polarized fingerprint very easily due to its glossy plastic arrival.
The screen comes in HD + only instead of FHD so you will find the maximum resolution for YouTube videos is 720 pixels.
-To charge the phone, you will need more than two hours via the charger included in the phone case, unlike the Redmi 8, which supports fast charging.

*Modern design in attractive colors.
You can carry it easily due to its light size.
*The battery works for a long time, it is the usual from Infinix.
You can operate two SIM cards and a memory card simultaneously.
*The first and cheapest hole-shaped phone from Infinix as the flagship phone format.
*The selfie camera performs well.
Cheapest price for 128GB and 6GB RAM.

-The official price is 189 $ for the 64GB version.
تعديل المقال
الأقسام Infinix