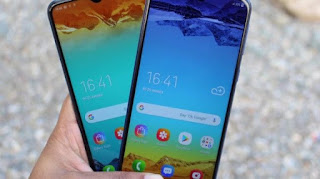 Samsung has announced the first M Series phone for the year 2020, a Samsung Galaxy M31 phone, so that the phone has the same strengths as the previous Galaxy M30s, which is the huge battery with the same design without any difference, and the differences we find in the cameras where stronger cameras were used with higher numbers to achieve results Best.

-The design of the phone is also plastic and frame, with a weight of 191 grams
6.4-inch super amoled display with a resolution of 1080 x 2340 pixels and FHD + quality with a width of 19.5: 9 and a pixel density of 411 pixels per inch and the screen comes with the Infinity U notch at the top
Exynos 9611 octa-core processor works with 11 nano-meter technology and up to 2.3GHz processor and Mali-G72 MP3 graphics processor
-Android 10 with One UI 2.0 interface
64 GB storage space with 4 GB RAM or 128 GB with 6 GB RAM and UFS 2.1 type memory
32 MP front camera with F / 2.0 lens slot supports HDR and supports 1080p @ 30fps video recording.
-Rear camera 64 MP with F / 1.8 lens slot with Samsung GW1 sensor and 8 MP with F / 2.2 lens slot which is Ultra Wide for wide photography, 5 MP with F / 2.4 lens slot for isolation and 5 MP with F / 2.4 lens aperture for photography Close.
The cameras support 2160p @ 30fps video recording with electronic stabilizer support
The cameras support HDR, Panorama and LED flash
The phone supports the 3.5 mm headphone port
The fingerprint on the phone is in Dahr
The 6000 mAh phone battery supports 15W charging via USB Type C.
-The Galaxy M31 was officially launched today, and the phone did not provide any noticeable new from the previous M30s as it comes with the same processor and the same battery with the same charging power which we wish to see a faster charging speed so that we can charge the huge battery faster, just as the phone comes with the same design, materials and screen Without any changes.
The difference that we saw here is that the back camera has become quadruple and the core has become 64 megapixels instead of 48 megapixels, and Macro camera has been added to photograph close with details, and I personally see that there is no benefit from this additional camera, as the phone needed more developments Such as using a stronger processor or using better external materials and the speed of charging also it is necessary to be stronger because the battery is very large and requires a long time to be charged.