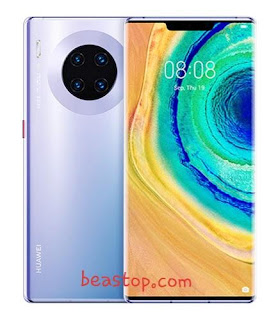 Huawei has announced its latest flagship phone, the Huawei Mate 30 Pro, to join the Mate series to be the best phone the company produces in terms of curvature of the edges in the sides with the strongest HiSilicon Kirin 990 processor so that you can get stronger performance, the phone is able to play heavy games and even intense daily tasks It works smoothly with a large battery with a capacity of 4500 mAh with its support for fast charging with Huawei Super Charge technology but unfortunately the screen is not supportive of 120hz or even 90hz with the lack of the phone to Google Play services but you can download it easily ... etc. So let's get to know the full specifications of Huawei phone Mate 30 Pro and what are its most important features Aoppe?! So let's review this as follows .


■ the advantages of the phone :

• The screen comes in the form of a large notch like the one we have previously seen on the Huawei Mate 20 Pro phone and you can cancel the note by setting if you do not wish from his lovers as the screen comes from the type OLED with an area of ​​6.53 inches with a quality of FHD + with a accuracy of 1176 × 2400 pixels at a density of 409 pixels For each inch, the screen supports 18.5: 9 aspect ratio, and the screen from the front side occupies 94.1% with a sixth-generation Corning Gorilla Glass protection layer and supports the HDR10 screen. You can also remove control buttons and use gestures instead to enjoy the largest possible amount of screen space. In addition to supporting the screen to the Dark Mode, you can also cancel the edges of the screen Screen also from the left and right side, just like you cancels the notch completely, while the screen supports the M-Pen.
• The phone comes with more than one version of the solid memory and random memory as follows: -
- The first version comes with 128 GB solid memory with 8 GB RAM.
- The second version comes with 256 GB solid memory with 8 GB RAM.
- The phone supports the ability to increase the space by means of a memory card of the type of Huawei's Nano Memory, which is now available in Egypt, and the phone supports the ability to increase up to 256 GB and is placed in the place of the second chip.
• The phone comes with a dual camera, where the first camera comes with a 32 megapixel camera with an F / 2.0 lens slot. As for the second camera, it is 3D TOF, it is for 3D photography.
• The rear camera comes with a quad camera where the main camera supports OIS optical stabilizer 40 megapixels with f / 1.6 lens slot and second camera 3x zoom without loss of detail 8 megapixels with f / 2.4 lens slot and also supports OIS optical stabilizer and the third camera for wide imaging comes with 40 accuracy Mega Pixels with F / 1.8 lens slot and the fourth camera comes from 3D TOF to help in isolation and dimension depth .. With dual LED flash and cameras come as usual Huawei from Leica optics.
• The supports NFC and IR blaster.
• The phone comes in dimensions 158.1 x 73.1 x 8.8 mm with a weight of 198 grams.
• As for the materials used in making the phone, the phone comes from the sixth generation Corning Gorilla Glass type front and back, with an aluminum frame.
• The phone comes waterproof and dustproof with an IP68 certificate of up to 2 meters under the water for about half an hour.
• The phone supports the ability to shoot videos in 4K quality with a resolution of 2160 pixels at a capture rate of 30 and 60 frames per second, it also supports photography in FHD quality with a resolution of 1080 pixels at a rate of 30, 60, 120 and 960 frames per second, also supports photography in HD quality with a resolution of 720 pixels at a capture rate of 7680 frames in the second .
• The phone supports Bluetooth version 5.1 in addition to its support for A2DP, aptX HD, LE.
• The phone supports GPS geolocation in addition to its support for other navigation systems such as Dual-band A-GPS, GLONASS, BDS, GALILEO, QZSS to determine the geographical location quickly and accurately.
• The battery comes with a capacity of 4500 mAh and supports fast charging at 40 watts and also supports wireless charging 27 watts.
• The phone can be used as a power bank and charge other phones in addition to its support for reverse wireless charging.
• The phone is available in more than one color as it is available in black, silver, purple and green colors.
• The phone comes with the latest Android 10 operating system with Huawei's latest interface EMUI 10 and the phone does not include Google Play services but you can download them easily and work without any problems.
• Excellent curved screen with relatively non-bezel edges, unlike the large notch shape.
• The screen produces saturated colors with very clear viewing angles while supporting HDR.
• The battery life is more than excellent and it supports strong fast charging. Cameras offer a unique experience, especially the wide camera, which produces many details, whether at night or day.
• The processor is capable of running anything no matter the newest and most powerful processor currently after Apple's A13 Bionic processor.
• Chic design with respectable waterproof materials.

■ Disadvantages of the phone :
1. Anonymous system and security updates from Google.
2. The price of the phone is high even without its support for Google services.
3. The phone is missing Google Play services, there is no Google Play store, and the applications are downloaded through the Huawei App Gallery, but with experience .. .
4. The external memory, the nano memory stick, is very expensive but you will not need it in the case of 256 GB storage space.
5. The phone is missing support for the 3.5mm headphone jack.
6. We had hoped the screen would come supported by 120hz or even 90hz to provide a better experience in terms of games and watching videos.
7. Missing the external speakers in stereo, which produces a better audio experience than the Mono speakers.
تعديل المقال
الأقسام Huawei