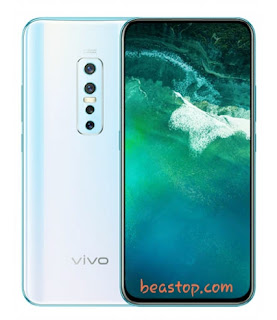 Vivo has become one of the companies that compete in the phone market thanks to the features of its phones, where always seek to innovate and bring new customers and compete against the companies and among the distinctive phones have a phone vivo V17 pro Let us know the advantages and disadvantages of this phone through this article.

• The durability and quality of the handset used comes from the front and back glass with sixth generation Gorilla protection with a plastic frame.
• The phone supports two SIM cards of the type Nano Sim and the slot port comes at the bottom.
• The phone supports 2G, 3G and 4G networks.
• The screen comes full screen and the company called the name Ulta FullViewTM The front camera works by Matur The Super AMOLED screen comes with an area of ​​6.44 inches with FHD + resolution of 1080 × 2400 pixels at a density of 409 pixels and the screen supports the new display dimensions by 20: 9 with Corning Gorilla Glass protection layer of the sixth generation and supports more than one display mode such as the default mode Standard and Normal Mode and Bright Mode and you can adjust the color temperature between the warm and cool as you want to see the colors of the screen and you can hide buttons Control and just use gestures to enjoy the tea experience As its full-screen mode also supports the Dark Mode.
• The phone comes with a solid memory capacity of 128 GB with random memory capacity of 8 GB.
• The phone does not support the possibility of increasing the storage space by memory card unfortunately.
• It comes with a Qualcomm SDM675 Snapdragon 675 11nano processor with Adreno 612 GPU.It is the same processor as the Samsung Galaxy A70 and supports Vivo Ultra Game Mode.
• It comes with a dual front camera where the first camera comes accurately 32 megapixel lens aperture F / 2.0 and the second camera for wide-ranging camera comes accurately 8 megapixels lens aperture F / 2.2 with flash and support Night Mode for shooting in the dark .. The front camera by Slider.
• The rear camera is a quad camera where the first camera comes with 48 megapixels with aperture of F / 1.8 lens which is the main camera of the phone with Sony IMX 582 sensor.The second camera comes with 8 megapixels with aperture of F / 2.2 lens for ultra wide and the third camera comes with 13 megapixels with aperture of F lens The 2.5-megapixel camera comes with a f / 2.4 aperture for isolation and portraiture with a single LED flash.
• The phone supports Bluetooth version 5 and A2DP, LE.
• It supports Wi-Fi at a / b / g / n / ac frequencies as well as support for dual band, Wi-Fi Direct, hotspot.
• Geolocation supports GPS as well as other navigation systems such as A-GPS, GLONASS, GALILEO, and BDS for accurate geolocation.
• Security features in the phone: Supports fingerprint sensor and comes integrated in the screen also supports the feature of Face Unlock and works through the front camera.
• The front camera works perfectly with a respectable selfie experience at wide angle with a special Night mode for night photography.
• The design is very attractive and the design is very solid with a respectable case that comes with the phone.
• The fingerprint sensor works fast and without any problems.
• Super AMOLED display gives excellent performance with good color saturation.
• The battery lasts for a long time during the day and is charged in a short time thanks to the phone's support for fast charging technology and Type C port.
• The Dark Mode works with all programs with an agreement between Vivo and most of the programs on the Google Store.
• You can change your voice while playing a PPG game with an agreement between Vivo and PPG.

1. The phone does not support the possibility of installing a memory card.
2. The phone is relatively heavy in weight with a fairly large thickness. Although the processor performance is acceptable in daily tasks and applications, it is not the strongest in the category in particular with the presence of Mi 9T and Realme XT.
3. The price of the phone is relatively high for competitors
تعديل المقال
الأقسام Vivo