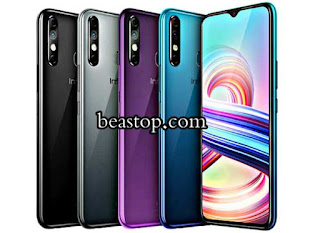 Infinix invented its latest Infinix Hot 8 phone to serve as an update to the previous version of Hot 7 Pro so the company is interested in the Hot 8 with the big screen with the latest look in addition to a giant battery capacity of 5000 mAh is enough to work with you for three days with the MT6762 Helio P22 processor for better performance At a cheaper price compared to the Infinix S4, the phone collects more than the most important feature of the big screen with the battery that has the largest capacity so far in the company, so let's get to know the rest of the full specifications of the Infinix Hot 8 and what are its most important advantages and disadvantages and will it be better compared to competing phones or not, especially the Realme C2 ?! As follows .

-The phone supports two SIM cards, Nano Sim.
Supports 2G, 3G, and 4G networks.
-The durability and manufacturing quality used in the phone comes from polycarbonate plastic.
-Radio supports FM.
-The phone comes in dimensions of 165 x 76.3 x 8.7 mm with a weight of 179 grams, so the phone is light in carrying.
-The screen comes in the form of a water drop in the form of water where the screen comes from the type of IPS LCD with an area of ​​6.6 inches in HD + 720 x 1600 pixels at a rate of pixels density of 269 pixels per inch so you will find the maximum accuracy in watching videos on YouTube is 720p and the screen supports the new dimensions by 20: 9
-The screen occupies 90% of the front end, as reported by Infinix, and you can hide the notch through the settings, you can split the screen to open two applications at once and you can cancel the control buttons and use gestures instead.
-The phone comes with a processor from MediaTek MT6762 Helio P22 with a PowerVR GE8320 graphic processor with Game Mode for game performance for better performance, it is the same as the Realme C2 processor and Nokia 3.1 Plus..
-The solid memory comes in a space of 64 GB with a random memory of 4 GB.
There is another version 32 GB with 3 GB RAM.
-The phone supports the ability to increase storage space with a memory card up to 256 GB.
The front camera comes with an 8-megapixel camera with an F / 1.8 lens slot with a single LED front flash and the front flash also works when charging the phone.
-The rear camera comes a little prominent on the back of the phone and comes with a triple camera, where the first camera comes with a 13-megapixel camera with an F / 1.8 lens slot and the second camera comes with a 2-megapixel resolution for the work of isolation and portraiture and the last camera is QVGA which is for shooting in low and low lighting with a quad-type rear flash LED.
-Supports 1080p FHD video recording at 30fps capture rate.
Security: -The fingerprint comes on the back of the phone with support for Face Unlock.
-The phone supports most other sensors such as acceleration, proximity and compass.
-The USB port comes from the Micro USB type with support for OTG.
The battery comes with a capacity of 5000 mAh.
-The phone comes with Android 9.0 Pie operating system with Infinix XOS 5.0.2 interface.
-The phone is available in green, purple, black and gray colors.

We did not find the additional microphone port on the phone.
The screen resolution is low and not the sharpest in its price category.
The phone charges within about three hours because it does not support fast charging.
Although Infinix succeeded in placing a front flash, it did not put a notification light.
It does not support making two copies of the communication software.
تعديل المقال
الأقسام Infinix