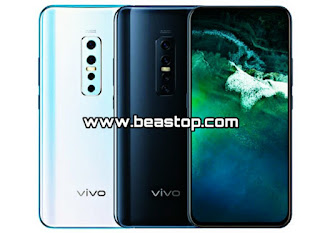 As long as Vivo seeks to innovate in its phones in an unprecedented way, it seeks a new and unique experience.The company announced the latest phones Vivo V17 Pro with a dual front camera offers a very distinctive experience and a rear camera with four full screen Super AMOLED with enough battery All day with the Qualcomm Snapdragon 675 processor. We know the full specifications of the phone Vivo V17 Pro and what are the most important advantages and disadvantages and will achieve the success that the company hopes through which let us know as follows:

-The phone does not support the possibility of installing a memory card.
-The phone is relatively heavy in weight with a fairly large thickness. Although the processor performance is acceptable in daily tasks and applications, it is not the strongest in the category in particular with the presence of Mi 9T and Realme XT.
-The price of the phone is relatively high for competitors.

- Supports FM radio.
-The phone comes with dimensions of 159 x 74.70 x 9.80 mm with a weight of 201.8 grams. The durability and quality of the handset used comes from the front and back glass with sixth generation Gorilla protection with a plastic frame.
-The phone supports two SIM cards of the type Nano Sim and the slot port comes at the bottom.
-The phone supports 2G, 3G and 4G networks.
-The phone comes with a solid memory capacity of 128 GB with random memory capacity of 8 GB.
- The phone does not support the possibility of increasing the storage space by memory card unfortunately. It comes with a Qualcomm SDM675 Snapdragon 675 11nano processor with Adreno 612 GPU.It is the same processor as the Samsung Galaxy A70 and supports Vivo Ultra Game Mode.
- Comes with a dual front camera where the first camera comes accurately 32 megapixel lens aperture F / 2.0 and the second camera for wide-ranging camera comes accurately 8 megapixels lens aperture F / 2.2 and supports Night Mode for shooting in the dark .. The front camera by Slider.
-The rear camera is a quad camera where the first camera comes with 48 megapixels with aperture of F / 1.8 lens which is the main camera of the phone with Sony IMX 582 sensor.
-The second camera comes with 8 megapixels with aperture of F / 2.2 lens for ultra wide and the third camera comes with 13 megapixels with aperture of F lens The 2.5-megapixel camera comes with a f / 2.4 aperture for isolation and portraiture with a single rear LED flash. The cameras support 4K video recording at 2160p at 30fps and 1080p FHD at 30fps.
-The phone supports a secondary microphone which is special for isolating noise and noise while talking, shooting, recording… etc and comes on top.
Supports fingerprint sensor and comes integrated with the screen also supports Face Unlock feature and works through the front camera. It also supports most other sensors such as accelerometer, proximity, compass and gyroscope for VR glasses.
- The phone supports the 3.5mm headphone port and comes at the top in a convenient place to use the phone. The USB port comes with the latest type where it comes from the Type C and also supports the OTG feature but must be activated from the settings.
-The battery comes with a capacity of 4100 mAh and supports fast charging power of 18 watts.
-The phone comes running Android 9.0 Pie with vivo interface Funtouch 9.1. Available in black and white.
تعديل المقال
الأقسام Vivo