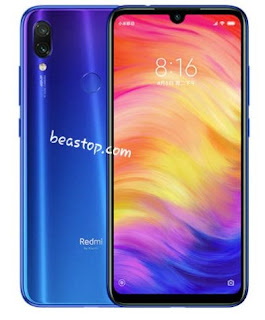 The Xiaomi Redmi Note 7 is a mid-range smartphone announced by Xiaomi on January 10, 2019. Successor to the Redmi Note 6 Pro, it has a Qualcomm Snapdragon 660 SoC, a dual sensor 48 + 5 megapixels and a battery of 4000 mAh compatible Quick Charge 4 . In this link we discuss with you the more specifications of the Xiaomi Redmi Note 7 :

* The phone supports FM radio. The phone comes with dimensions of 159.21 × 75.21 × 8.1 with a weight of 186 grams with the back materials of glass and plastic frame, with protection from splash of water as claimed by Xiaomi.
* The phone supports two SIM cards of type Nano Sim.
* The phone supports the IR Blaster port for controlling electrical devices.
* The phone supports all communication networks starting from the second generation 2G, 3G and 4G.
* The screen comes in the form of Water Drop to be the first phone in the Redmi series that notch where comes the type of IPS LCD screen with an area of ​​6.3 inches FHD + resolution 1080 × 2340 pixels at a density of pixels 409 pixels per inch to offer dimensions 19.5: 9 with a curve of 2.5 There is a Corning Gorilla Glass v5 on the screen to protect it from breakage and scratching in general.
that edst f/2.2 .
The phone comes with a Qualcomm Snapdragon 660 processor 14 nano technology and operates at a full frequency of 2.2 GHz. The graphics processor comes from Adreno 512 and is very suitable for gaming and playing heavy games like Pubg on High HD graphics. More than one version of the solid and RAM memory is available from the phone as follows:
* - The first version comes with 32 GB of solid memory and 3 GB of RAM.
- The second version comes with 64 GB of solid memory and 4 GB of RAM.
- There is a third version 128 GB with 4 GB RAM available in Egypt.
- The phone also supports the possibility of increasing the space by memory card up to 256 GB capacity.
* The front camera comes with a 13-megapixel f / 2.2 aperture .
* The phone also comes with a dual rear camera in a vertical and slightly prominent on the back of the phone where the first camera comes accurately 48 megapixels aperture lens F / 1.8 sensor Samsung while the second camera comes accurately 5 megapixels lens aperture F / 2.4 with dual flash type of LED flash The cameras support AI and HDR, and the camera supports Night Mood mode for distinctive images to get excellent images in low light .
* the phone Supports most of the sensors such as the fingerprint sensor and comes in the back of the phone with support for sensors acceleration and proximity, gyroscope, compass and light. Supports Wi-Fi at all available frequencies a / b / g / n / ac with support for dual-band, Wi-Fi Direct, hotspot. Bluetooth comes with the latest version where it comes with the fifth version with support for A2DP, LE. GPS supports GPS with A-GPS, GLONASS and BDS navigation systems.
* The phone still supports the 3.5-port headphone port and comes at the top of the phone. The USB port comes with the latest port, where it comes Type-C.
* The phone comes with the latest operating system Android 9.0 Pie with the latest interface available from Xiaomi so far MIUI 10 and notifications appear next to the notch. The phone comes with a capacity of 4000 mAh and supports fast charging with Quick Charge 4 technology, but the fast charger does not come in the phone case. The phone comes in black, blue and gradient red, and there is a new white color for the 64GB version.

Other advantages of The Xiaomi Redmi Note 7 :

>> The phone will be one of the most powerful phones in the middle class in terms of specifications.
>> Excellent pricing for the Xiaomi Note 7 with an extended warranty period with a 30-day replacement in case of a defect with an 18-month warranty period and a free replacement of the screen if broken in the first 6 months of the phone.
>>The battery performance is excellent and holds up with you for a long time and lasts all day. It is the first Redmi phone to support the Type C port.
>> The battery is charged within a short period of time due to its support for fast charging with Quick Charge 4 technology in the case of using a fast charger but is charged within two hours and followed by the charger supplied with the phone.
>> The best rear camera is present in a smartphone in that price category especially with the use of Google Camera app which is easily installed on the phone.

Disadvantages of the phone Redmi Note 7:

☆ You cannot use two SIM cards and a memory card simultaneously.
☆ The appearance of the rear camera is exaggerated even after mounting the case included with the phone.
☆ Notifications next to Notch do not appear even though they exist in the phone settings and notifications bulb only works with charging, and we expect the arrival of an update for all those problems.
☆ The phone is prone to dirt and polarization very easily due to its shiny shape.
☆ You will have to buy a charger to enjoy the Quick Charge 4 because the included charger is slow, and there are no earphones with the phone.
Despite the few flaws in the Xiaomi Redmi not 7 , it remains one of the best phones worth buying due to its many features as the company is keen to provide the best always at a lower price.
تعديل المقال
الأقسام Xiaomi