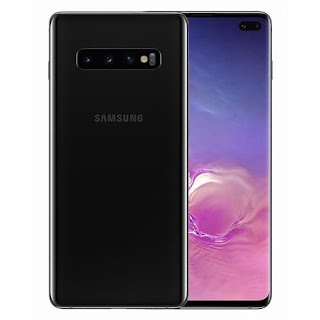 Samsung Galaxy S10 Plus is the most powerful phone in the S series, which will compete with Samsung this year, it comes with the same screen size of the Samsung Galaxy Note 9, although it comes with a lighter weight and dimensions less than it has been exploited the edges of the phone to the greatest degree possible With the introduction of a dual front camera which is used for the first time in Samsung phones in general and in the Galaxy series in particular with the largest battery Samsung has made so far 4100 mA with the experience of the most powerful performance available for the processor technology 8nm let us know in detail on the phone Samsung Galaxy S10 Plus with View its specifications , advantages and disadvantages:

A) The phone comes with dimensions of 157.6 × 74.1 × 7.8 mm while the weight of the phone comes with a weight of 175 grams is lighter than the previous Samsung Galaxy S9 Plus, and there is another version of the phone of ceramic weight of 198 grams. The durability and quality of the workmanship comes from the front and back of the glass with a layer of Gorilla Glass in the fifth version on the back with an aluminum frame and a ceramic version.
B) The phone supports two SIM cards of type Nano Sim where comes the port of the SIM card type Hybrid Sim The phone supports all networks where it supports 2G networks, 3G networks and 4G networks. The speed of data communication in the phone comes from the type of LTE Cat 20 so you will find that the data download speed of 2 GB per second and speed of the upload 150 Mbps per seconde .
C) The Samsung Galaxy S10 Plus comes with two versions of the processor as follows: -
- The first version of the processor from Samsung itself type Exynos 9820 Octa technology 8nm graphics processor type Mali-G76 MP12, which will be provided in the Middle East and Egypt.
- The second version of Qualcomm processor the latest and most powerful type of SDM855 Snapdragon 855 technology 7nm graphics processor from Adreno 640, which will be provided in America and Europe.
- The Samsung Galaxy S10 Plus comes with more than one version of solid and RAM memory as follows :
- The first version comes with a solid memory capacity of 128 GB with random memory capacity of 8 GB.
- The second version comes with a solid memory capacity of 512 GB with random memory capacity of 8 GB in the ceramic version only.
- The third version comes with a solid memory capacity of 1 TB with 12 GB of RAM in the ceramic version only.
- You can also increase the space by installing a memory card up to 512 GB capacity and is installed in place of the second chip.
D) The phone comes waterproof and dustproof with IP68 certification up to 1.5 meters under water for 30 minutes and the warranty does not cover damage to the phone, whether from water or dust. The new Infinity O comes with a 6.4-inch QHD + resolution of 1440 x 3040 pixels, with a density of 522 pixels per inch.The screen occupies 87.5% of the front of the phone with 19: 9 aspect ratio with HDR10 + and HDR10 support. Always on display The screen comes with a protection layer with the latest version of Corning Gorilla Glass v6 with curvature on both sides of the screen edge and you can add shortcuts by swiping in the sides as usual Samsung in the S series.
E) The front camera comes dual for the first time in Samsung phones where the first camera comes with 10 megapixels with dual Pixel technology to increase the image quality with aperture of F / 1.9 lens while the second camera comes with a resolution of 8 megapixels with aperture of lens F / 2.2 and supports the live focus and is Using the dual front camera.
F) The rear camera comes triple where the first camera comes accurately 12 megapixels aperture F / 2.4 and is for telephoto photography and supports focus and optical stabilizer OIS and the second camera is the main comes with 12 megapixels aperture F / 1.5 or F / 2.4.
The battery comes with a capacity of 4100 mAh is larger than the battery of the Galaxy Note 9 even and supports the battery fast charging.The wireless charging has been developed to become the Quick Charge 2.0 technology of 15 watts.
G) battery life :
The phone also supports reverse charging 9 watts and reverse charging to charge other devices wirelessly. The phone comes with the latest operating system where it comes with Android 9 Pie with the interface of the new One UI.

* The phone offers an excellent sound experience.
* The edges of the phones were optimized compared to the previous year.
* Integrated fingerprint sensor with the screen works fast and acceptable. Random memory gives flexibility in performance and ease and smooth navigation between applications.
* The cameras give the phone more excellent performance in both high and low light.
* The battery gives excellent performance due to the energy-efficient processor with the phone supporting reverse charging for the first time in Samsung phones.
* The Dynamic AMOLED display delivers stunning performance, as Samsung is known to be the best in the industry. The screen comes with the latest protection layer as it comes from the type of Corning Gorilla Glass 6.

* The phone is missing the notification bulb.
* Low quality selfie camera in low light. There is no powerful Night Mode in the rear camera that discusses the Huawei Mate and Google Pixel Mode.
* Trouble or slow opening of the phone fingerprint The phone appeared soiled because of the arrival of glass and ceramics.
* You will find some people tend not to use the screen Bixby Unnamed: Bixby. * The fast charging of 15W battery is not developed.
تعديل المقال
الأقسام Samsung phones