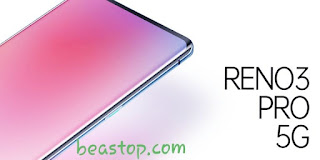 Oppo confirmed last week at the ColorOS 7 launch event in China that the Reno 3 series will debut next month with support for 5G networks in dual mode.
Before the official launch of the phone, the company's vice president and head of global marketing, Brian Shen, tweet through his official account on the Twitter platform showing a picture of the phone Oppo Reno 3 Pro 5G, which may be launched next month. The phone appears to have a curved display with a very light curvature and thin bezels.Oppo CEO said the phone will be very thin with a thickness of only 7.7mm (except the viewfinder). Oppo vice president and head of global marketing claimed that Oppo Reno 3 Pro 5G is the thinnest phone in its price segment that provides support for independent and independent 5G networks.
The picture of the phone shared by Brian Sheen shows the lower half of the phone, highlighting the thin chin and side edges, as well as a slight curve along the left and right edges. The tweets indicate that the phone will carry a glass object, and it appears to have a metal frame that rotates around the edges. The power button also has a thin line that appears to have an LED light to act as a notification light, something that we've seen recently in a few Nokia-branded phones. This is the first time to show information about the phone Oppo Reno 3 Pro 5G, as the previous leaks talked about the normal model Oppo Reno 3. Speaking of specs, the Oppo Reno 3 is supposed to include an AMOLED display with a resolution of 1080 x 2400 pixels and a 6.5-inch size with a refresh rate of 90 hertz.
The screen will reportedly be protected by a layer of Corning Gorilla Glass 6, with a fingerprint sensor built underneath the screen for authentication. The upcoming phone is rumored to be powered by the ColorOS 7 user interface, and will provide dual support for 5G networks, independent SA and non-independent NSA. Details and leaks are rare about the Reno3 Pro 5G, but more information about the phone is expected in the coming days.