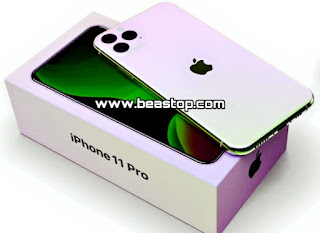 Apple launched its three phones iPhone 11, iPhone 8 plus and iPhone 11 Pro Max to be the Max version is the best and most expensive version in all respects and to serve as an update to the previous Apple phone iPhone XS Max has been improved screen brightness and follow the trend of Haptic Touch instead of 3D Touch Apple calls the screen Super Retina XDR display on the OLED screen and comes the same space as the previous XS MAX for the screen with the strongest performance thanks to the processor A13 Bionic is better than the processor Huawei Kirin 980 and processor Qualcomm Snapdragon 855 but still technology The Nano 7 is like the previous generation A12 Bionic with the addition of a third rear camera and improved front-facing camera H best both in terms of image quality or in response to the Face ID Let us review the full specifications of the phone the iPhone 11 Pro Max.

-Phone weight is heavy.
-The phone still comes with a traditional USB port Lightning.
-The phone does not support the 3.5mm headphone port, because the phone comes from glass and heavy weight exposes it to break more easily. Notice the shape is relatively old and the minimum storage space of 64 GB had to be replaced by at least 128 GB.
-There is no drastic change other than the screen size and battery capacity only compared to the iPhone 11 Pro.

-iPhone 11 max pro comes dimensions of 158 × 77.8 × 8.1 mm with an estimated weight of 226 grams.
-The phone supports water and dust resistance IP68 certificate up to 4 meters under water for half an hour. With the aluminum frame.
-The phone supports two SIM cards where the first chip comes from the type of Nano Sim and the second chip of the type eSIM The phone supports networks  2G, 3G and 4G .
-Does not support the possibility of increasing the space by an external memory card as usual in all versions of Apple. As for the performance comes the phone processor Apple the latest A13 Bionic to outperform the performance of all phones currently in the market. The front camera supports Animoji and Memoji photography as well as support for Slow Motion shooting with a secondary TOF 3D camera for isolation and fingerprint. The second comes with a resolution of 12 megapixels m F / 2.0 aperture for Telephoto.
-The phone supports an additional microphone to isolate noise and noise during the use of the phone in general.
↚ The phone supports the filming of 4K videos at 2160 pixels at a rate of 24, 30 and 60 frames per second and supports 1080p FHD shooting at 30 and 60 frames per second HD 720p at 30 frames per second, Slow Motion, the phone supports 1080p FHD resolution at 120 and 240 frames per second in addition to support for time lapse and cinematic video.
-The phone is unlocked by Apple's Face ID with a major upgrade from the previous generation iPhone XS MAX. The phone supports most other sensors where it supports acceleration sensor, proximity, compass, atmospheric pressure and gyroscope.
- Wi-Fi supports frequencies a / b / g / n / ac / ax with support for dual band, hotspot Bluetooth also supports the latest version of the fifth version in addition to support for A2DP, LE.
- iPhone 11 Pro Max supports GPS geolocation in addition to support for A-GPS, GLONASS, GALILEO As for the USB port comes from the traditional type of Apple where it comes from the type of Lightning.
-The battery comes with a capacity of 4000 mA is the largest Currently Tarah in the iPhone series supports rapid battery charging power 18-watt also supports wireless charging.