Samsung Galaxy A80 review what are the most important advantages and disadvantages ? 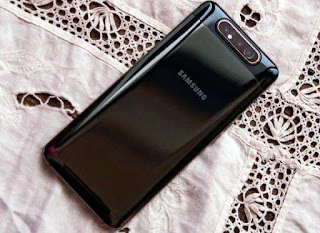 Samsung follows the trend of Water Drop recently in all its previous phones in the A series but with the Samsung Galaxy A80 things are different Samsung follows with this phone a different direction The whole phone comes as a screen without any edges and not the first phone in Samsung It comes with no edges. The company developed its designs very much. When shooting with the front camera you will find that the top is mechanically up and the rear camera turns 180 degrees to become the front camera. The company made a remarkable effort to make the three cameras work together at the same time.Laage Shipp in every sense of the word, let us know the full specifications of the Samsung Galaxy A80 phone and what are the most important advantages and disadvantages ?

The phone comes in dimensions of 165.2 x 76.5 x 9.3 mm with a glass design and an aluminum frame. The phone supports two SIM-type connections. The NFC supports all networks, supporting 2G networks, 3G networks and networks. The fourth generation 4G. The handset will not be found in the front of the phone. It comes at the bottom of the screen. It comes with the same Huawei technology in its P30 Pro phone. It is buried under the screen. The front end of the phone comes with a full interface. The phone is a Super AMOLED 6.7 inches in FHD + quality at 1080 x 2400 pixels at a density of 393 pixels Per inch and while watching videos on the screen can also connect video at the same time. The processor comes with the processor of the Qualcomm SDM730 Snapdragon 730 with 8nm technology As for the graphic processor Adreno 618.
The 128-megapixel camera comes with a 48-megapixel camera and the F / 2.0 lens. The second camera comes with an 8 megapixel camera for the Ultra Wide is the F / 2.2 lens. The third camera comes from a 3D TOF 3D camera with a LED flash. The front camera is the same as the rear camera. The camera is 180 degree swivel. The company has telephoned the Oppo Find X and the Oppo N1. The phone comes with a 4K video resolution of 2160 pixels 30-frame frame rate and 1080p resolution at 30 frames per second and supports isolation and portability even while shooting video. 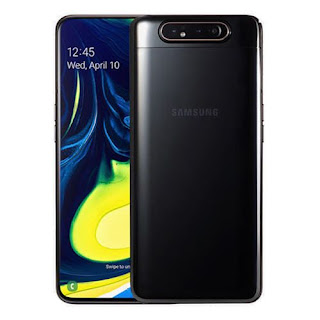 The phone supports a secondary microphone for noise and noise isolation while using the phone. Supports Dolby Atmos audio technology. Supports GPS navigation with support for other navigation systems such as A-GPS, GLONASS, GALILEO, BDS. b / g / n / ac with support for dual-band, Wi-Fi Direct, hotspot. Bluetooth supports version 5 with support for A2DP, LE, aptX. Safety features in the phone: You will find the fingerprint sensor integrated into the screen. Supports most other sensors such as accelerometer, proximity, compass and gyroscope for virtual reality monitors. The USB port comes from Type C with its own support The phone comes with the latest Android 9.0 Pie operating system with the One UI interface. The battery comes with a capacity of 3700 mA and supports 25 W fast charging. The phone is available in more than one color, available in white, black and gold.

The Samsung Galaxy A80 does not support wireless charging. The battery pack would have been better, but it is OK. The phone does not support the 3.5 mm headphone jack. The phone is large, even larger than the Galaxy Note 9. You can increase the space by installing the external memory. There is still a button dedicated to Bixby although it is not used for many users. We are sure about the life span or the accumulation of dust for the mechanical system of the front camera. Samsung Galaxy A80 features an impressive design and a full front end is an excellent Super Amold screen and screen. The world's first Snapdragon 730 delivers superb battery performance that supports video capture with great stability through the Super Steady video is the same as the leading phones in the S10 series.
تعديل المقال
الأقسام Samsung phones